The decision to evacuate and intern Germans, Japanese & Italians in America began at least five years before the attack on Pearl Harbor. J. Edgar Hoover had begun to compile the notorious ABC list. This list was created with concerns over national security and was originally aimed at Communists, Fascists, and Nazis. By the end of 1939, it had evolved into wartime hysteria. 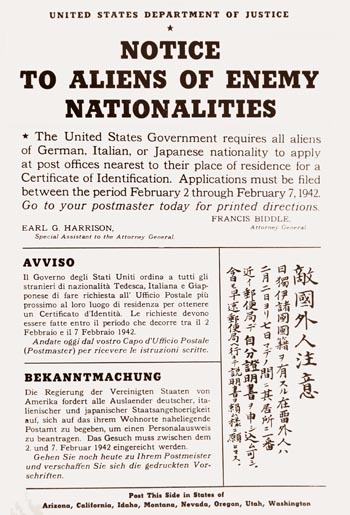 It is a common misperception that only Japanese Americans were interned during WWII. The German American wartime experience remains largely overlooked by historians and generally unknown to most Americans. It is important, when studying WWII internment to make distinctions between German-Americans, Japanese-Americans,, and German Aliens who were not U.S. citizens. In light of those terms, few German-Americans were interned. Nearly 11,000 Germans were detained and of the 11,000, 4,000 were from Latin American and were interned. Roughly 3,000 were interned from the United States. Japanese, Germans and Italians suffered illegal searches, seizures, relocation, harassment, interrogation, family separation, scapegoating, deportation and repatriation.

After the bombing of Pearl Harbor, December 7, 1941, the nation was clearly under threat and historically when there is a threat, a pattern occurs. Families around the world are at risk whenever government policy makers assume that ethnicity alone decides loyalty. While WWII internment was driven by racial bigotry, it is important to note that other factors could also label a group dangerous in times of national crisis. This is a relevant lesson, since today the Alien Enemies Act is still in use for the “War on Terror”.

In our documentary, former internees and their families come forward to tell their heartbreaking stories. It is important to acknowledge, yet another, civil liberties violation that happened here on American soil.

If you know anyone who has been directly involved with any of the American internment programs, please contact us