How To Do Professional Looking Interview Lighting On A Tiny Budget.

There are so many layers to this story, it has been a fascinating process hearing the different perspectives about internment from both victims and those who were involved with carrying it out. I think it's shaping up to be a very compelling, very heartfelt, 90 minute feature.

So – with that said, I wanted to talk about the mechanics of interview lighting.

Here are the restrictions we are dealing with…

The set up has to be very quick. Within 15 minutes from the time we arrive, we want to be shooting. When I worked for CNN back in the 80s, we had 2 or 3 guys setting up interviews. Our set up time for an interview like this was typically 30 minutes.

With this project, I had to do the set up on my own – a one man band – finding the shot, setting it up, lighting it, setting up sound – and doing it without much equipment. Most of these interviews are in the homes of the interviewee – and we wanted to keep our footprint very small.

I've used two different cameras. A Canon 5D Mark III and a Sony PMW EX-1. I've owned the EX-1 for 4 or 5 years. It gives beautiful images, but has a small sensor. The 5D is an amazing camera and the low light capabilities are better than the EX-1.

Since we are doing available light in most situations, I decided to do most of the project with my new 5D Mark III. 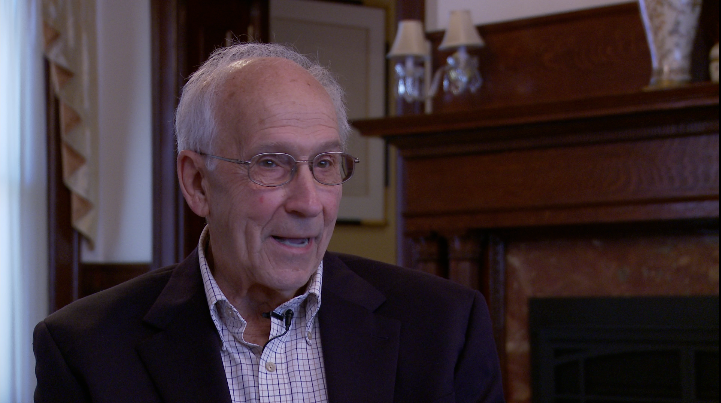 This first interview (above) is the only one I did with the EX-1. We shot it in a mansion where the internees where held in South Chicago. The gain was set at 0dB, the aperture is wide open 1.9f and we were shooting 1080p at 24 fps. The native ISO on the EX-1 is about 500, based on my measurements.

This footage has not been color graded yet. I wanted to show you the lighting the way it was captured. I did shrink the size of the shot so it would fit on the page.

So let's talk about the light sources.

The room has windows on two parallel walls. You can see them bordering the left side of the frame from behind Eberhard. The room is 30 feet across. He is sitting about 12 feet from the back wall and about 20 feet from the windows in front of him.

Kristina is sitting to the right of the camera doing the interview in an attempt to keep his eye line very much on axis with the lens. I believe that the closer you can get to being on axis with an interview like this, the more personal the shot will feel. As you go off axis, you create separation between the subject and audience. 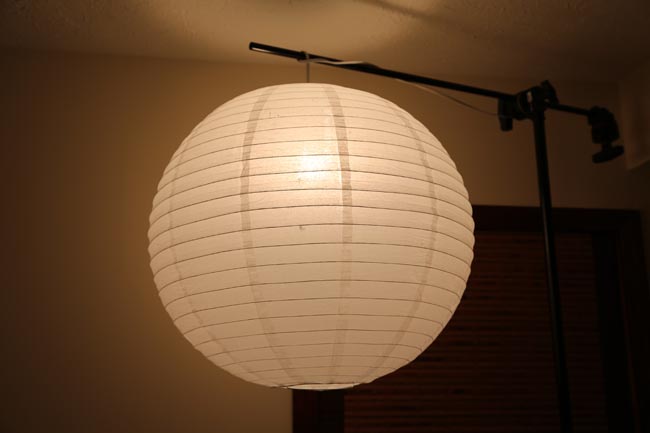 For the interview, I placed the china ball a couple of feet above his head on a C-stand to the right and about equal distance between the camera and the subject. It is very close to the axis of the shot. There is also a fold out white reflector on a stand about 2 feet left of the subject, providing some fill. A 100 watt bulb doesn't put out much light compared to the window light – but it softened the shot beautifully.

I also like the eye light that we are getting naturally from the china ball and the fact that I was able to angle the shot in a way that kept his glasses from reflecting the bank of diffused windows in front of him.

I opened the back curtains enough to give a nice sheen on the fireplace to the right. I also kept the actual window out of the picture since it would have blown out if I left it in frame. The light from the window is giving his jacket the back rim light.

One thing you may notice is the bluish tone to the shot because a lot of it was daylight. The bulb in the china ball was a "Reveal 100 Daylight" bulb that I got at the grocery. They are not balanced at 5200 kelvin even though they are called daylight bulbs – they seem to be closer to 3900k if you don't use a dimmer.

It took me longer to write about how I did it than it took to light it.

Let's look at a few interviews that I shot with the 5D Mark III. 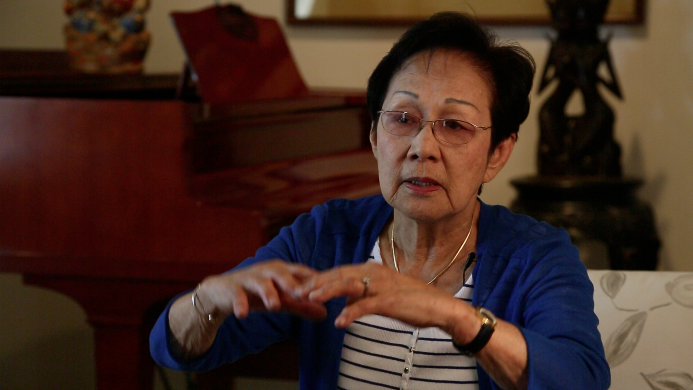 Yae is sitting in her living room. There is a bank of windows along the wall to the left. I was able to get the background to go out of focus a bit more because of the larger sensor on the 5D, the wide open aperture and the 105mm lens.

When I purchase the EX-1 a few years ago, everyone was saying that the "film look" could be achieved on video by shooting 24 frames per second. I never found this to be the case. The way to get the film look is by using the shorter depth of field that only a large sensor camera can give you – the Letus 35mm adapter works, but it's a pain in the butt to use for run and gun work and impossible with a zoom lens.

We were even more limited in our space in this house than we were in the previous one so getting the background to go out of focus was more of a challenge. I shot it with a 105mm lens at 3200 ISO. The aperture was opened to 4.0f and the shutter at 1/50th.

The picture on the 5D Mark III is amazingly noiseless at 3200 ISO and I've been surprised and pleased by how well 6400 ISO looks as well. I think the low light capabilities make this camera perfect for the low budget filmmaker. When I started shooting back in the late 70s on 16mm film, we used Kodak 7247 negative stock that was rated at 100ASA (now called ISO). There is no way we would have been able to get an acceptable exposure at 100ASA with the lighting set up we used this time.

Low light cameras like this have made life much easier AND I think it is changing the style of lighting. I could talk about my opinions on this for quite a while, but I'll stick with the issue at hand for now.

The glow from the left is coming through the shears of the living room windows (it was bright outside, but the window was in shade). I used the china ball again, but this time I put it closer to the subject – the bottom of the ball was about a foot higher than her head and it was about 3 feet away from her face slightly to the right off camera axis. There is no other lighting in the room. You can see some window reflection in her glasses, but as she moves, it didn't bother me.

We also moved around a few props that we found in her living room to give the background some interest and to express a bit of her personality and heritage.

Another note: I am using a 7' monitor mounted to the camera hot shoe to help with focusing. It also allows me to angle the monitor so I can sit down during the interviews – which are lasting between 1-2 hours.

It's a cheap Marshall monitor ($250) and has a lot more contrast than what you see in this screenshot. It also separates the colors differently – I was a little nervous when I first started using it because it made the different color temperatures in the shot pop out. In this shot, her face, on the left side went much bluer on the monitor.

I probably could focus fine with the screen on the camera or use a loupe attachment, but I am also using a camera stabilizer with a vest for other shots in the project and needed a monitor for that, so I bought one monitor for both functions.

While I'm at it, I also bought a Beachtek DXA-SLR XLR adapter ($450 from bandh.com) for my mics. It works wonderfully and we are getting some excellent sound.

Here is another shot. 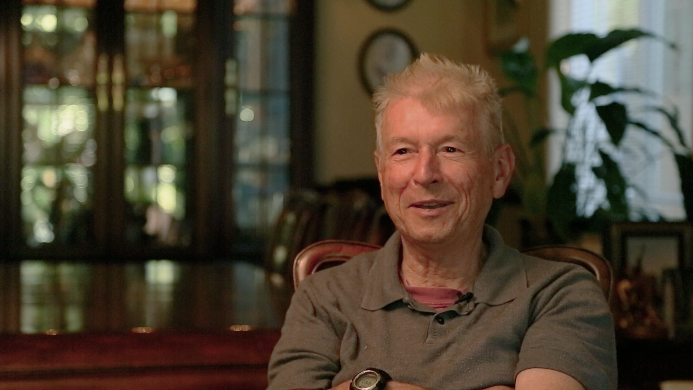 This was a challenge to light since it was very close to dusk when we shot it.

Again, I was at 4.0, 1/50th, 3200 ISO and shooting 1080p, 24 fps. We get a different look because the china ball is now the main keylight. It is positioned above and to the left of frame and Kristi was sitting slightly off axis to the camera lens on the left to direct his eyeline.

I also made a mistake putting him in a high backed chair. When you do this with folks, they often end up leaning back and slouching which doesn't make them look as good.

I love what the back window and the reflection of the yard outside did, bringing green and blue reflections to the glass on the furniture in the background. We moved the plant on the right to give a bit of shape to the window area and adjusted some of the stuff in the background. I also like the sheen off the dining room table. There is depth and personality to the shot. I turned on the light in the china cabinet and you can see the top shelf went a bit orange since the tungsten bulb in there was a very low color temperature. I wouldn't do it that if I had it to do again.

I have a higher contrast ratio on this shot and I could have used a reflector on the right side of the shot filling in and softening his face. Overall, I'm satisfied with the shot and think it represents him and what he has to say very well.

Here are a couple more shots that are different environments, but are lit with the same tools. 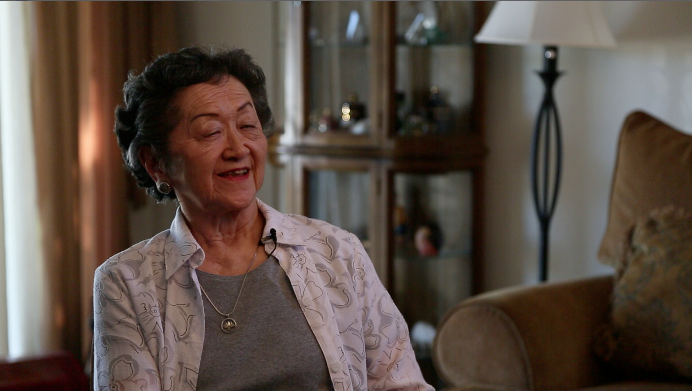 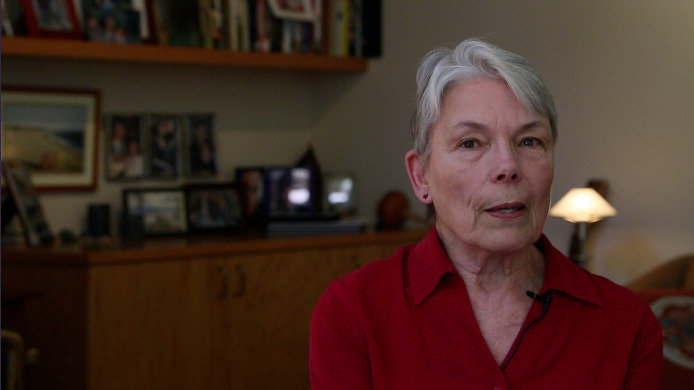 All of these folks were very interesting to talk to and we got a lot of very usable footage.

A lot of interview lighting that I see these days is so harsh. One of the things we wanted for this film was a softer, friendlier look. All of these folks were children during WWII and were thrown in to a very difficult situation with their parents. We are looking for the heart of the story.

The memories they have and how those memories conflict with each other tells a fascinating story about human memory, family, hardship and how the human spirit overcomes horrible events. It also speaks to the concept of fear molding public policy – about a nation who sees itself as the "good guy" can abuse it's power when it's people are frightened.

I'm looking forward to the upcoming interviews and editing the piece together. I'll keep you posted as we progress.

One thought on “Interview Lighting For Documentaries”