A Government That Manipulates With Fear – By Kristina Wagner

Nativism has always been a driving a force in America, but it was during WWI that the government established the precedent of manipulating nativist fears as a way of clamping down on civil liberties and curtailing dissent. During WWI anyone who opposed the war, for whatever reason, was synonymous with disloyalty and even sedition. 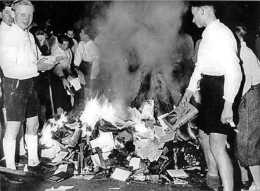 Creating fear and then exploiting that fear, the government used the "threat" of all dissenters to justify a larger crackdown on civil liberties. Both legal and illegal tools were employed, including legislation, surveillance, intimidation, and secrecy.

Since WWI German-American community leaders were outspoken and self-assured. They did not hesitate to express their sympathies for the fatherland, especially since America had not yet entered the war. American public opinion supported the British, and U.S. arms manufacturers sold large quantities of munitions to British and France on credit. American bankers granted huge loans to the Allies. Republican Senator Robert La Follette of Wisconsin, a peace advocate, asked, "How can we maintain a semblance of real neutrality while we are supplying the Allies with munitions of war and money to prosecute war?" German-American organizations tried to sway foreign policy in support of the Allies. German-Americans were now under suspicion. American leaders wanted to know what Germans were involved with Communist, Fascist, and other subversive groups. The government was promoting an "ALIEN ENEMY" hysteria.