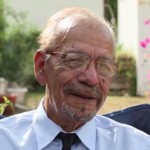 My friend, Richard G. Santos, passed away in his sleep February 22, 2013, in Pearsall, TX. I first met him in the fall of 2011. I had begun my senior thesis for college when he introduced me to many of the internees that we have been lucky enough to interview for the Children of Internment film. The "voice" of the German internees was a huge part of his agenda as a historian. I have attached an email he sent to me on his recollection of two incidents at the First National Reunion of the END_OF_DOCUMENT_TOKEN_TO_BE_REPLACED

We just completed the biographies page of the folks we have interviewed for the project so far. You can see our interview pictures and read about everyone on this page: click here Meeting and working with these folks has been a huge pleasure and a lot of fun. Our sincere thanks goes out to each and every one of them for giving us their time, welcoming us into their homes like we were family and speaking to us candidly and with such good humor. Our goal is to do justice to their stories and let END_OF_DOCUMENT_TOKEN_TO_BE_REPLACED