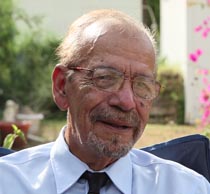 My friend, Richard G. Santos, passed away in his sleep February 22, 2013, in Pearsall, TX. I first met him in the fall of 2011. I had begun my senior thesis for college when he introduced me to many of the internees that we have been lucky enough to interview for the Children of Internment film. The "voice" of the German internees was a huge part of his agenda as a historian. I have attached an email he sent to me on his recollection of two incidents at the First National Reunion of the former WWII internees in November 2002. I will miss him dearly. Kristina

RECOLLECTION OF TWO INCIDENTS AT FIRST NATIONAL REUNION OF FORMER WWII INTERNEES IN NOVEMBER 2002
1) At the end of the memorial function by the water irrigation tank – swimming pool, I was approached by a group of German Americans. I was asked what I wanted "for having put the reunion together". I politely and tactfully answered that I hoped I was not being insulted or being offered financial consideration. They immediately apologized and said they felt they "should do something to show their appreciation". I asked them to sing Lili Marlene in German. Much to my surprise, to a person they said they did not know it in German but could sing it in English. Later after they had boarded on the bus, I was called to attend to an emergency on the bus. I ran fast as I could and on boarding the bus, the German former internees HUMMED Lili Marlene. I was very, very touched and thanked them. I walked to my car and played Lili Marlene by Marlena Dietrich (in German) at full blast in appreciation of their effort(s). Eb Fuhr later sent email saying a group was practicing the song in German and would sing it at next reunion.

2)  In relation to the above, one of the German Americans told me their favorite sing-along song was "DON'T FENCE ME IN". I asked the local Crystal City radio station to play the Bing Crosby and Andrew Sister recording (which was popular during WWII and which I already had on tape) and every time I hear it (even today) I think of the U. S. born internees singing the very appropriate and relevant "Don't Fence Me In". I hear not Crosby and Andrew Sisters but my friends the former internees. Eb did not offer to sing this song and I have teased him about it.

One thought on “Richard Santos – In Memoriam”